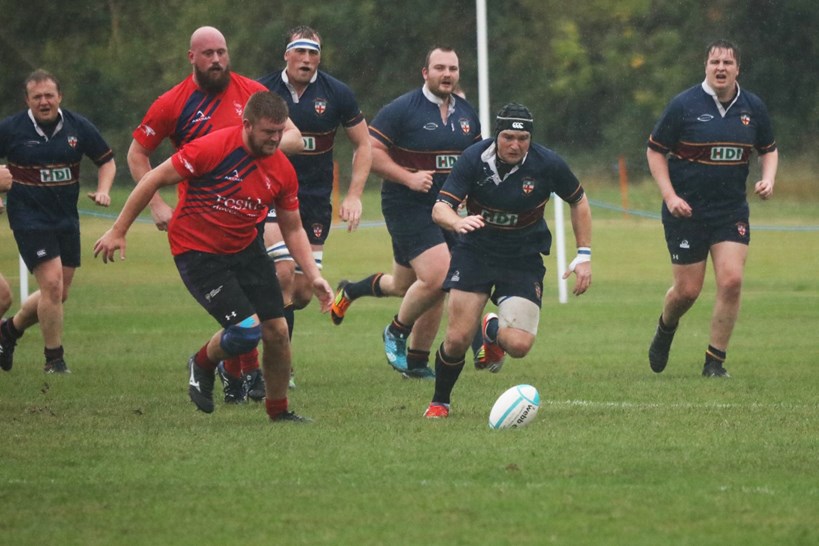 After a buoyant start to the season it was a top of the table clash at Motspur Park. The mutant farmers from Cranleigh came to town at the home of the gayest club in Surrey. Unfortunately, the weather meant that the usually fun running team of Old Blues had to change their game plan and be ready for a fight in the wind and rain.

The first half was typified by a lot of dropped balls and scrums in which Cranleigh dominated due to the conditions, but the Blues held up well. After a superb kick and chase from the new skipper Alex Satterfield took us into the 22, the attack was halted abruptly by an enormous shoulder charge to the throat of James Peacock. Somehow the referee didn't see the severity of this and only sent the animal to the sin bin for 10 minutes. Unfortunately, Blues were unable to maintain their momentum from this position. Blues fortunes didn't get any better after losing hooker Rainer Pessenbacher to a stamp on his ankle. This meant we had to play with 14 men for the remaining 60 minutes due to no back up hooker. Who would have thought props couldn't hook.

The rest of the half saw a very well-timed kicking game from Cranleigh peg back the Blues and eventually resulted in the first try with a nice chip in for their winger. 5 - 0. The rest of the half continued in this fashion with Blues pegged back and Cranleigh scoring from a scrum on the blindside where blues struggled to match numbers and get off the line. 10-0. Cranleigh also unfortunately lost their Fly half to a brutal head injury leaving a pool of blood in the far corner. Half Time.

A proper game of rugby again failed to break out in the second half due to dropped balls in the pouring rain. This lead to several uncontested scrums, increased by the number of needless scrums called by the ref for a very messy breakdown throughout. The game was played largely in the middle of the pitch as a result with the only forays into the Cranleigh half leading to a penalty from Will Avery, 10-3. Old Blues perhaps also left a try begging being a bit iff the pace throughout and got turned over regularly. It looked like we were heading for a bonus point until the Cranleigh winger kicked a 40m penalty in the pouring rain into the wind in the dying minutes to put it out of reach. 13-3.

Cranleigh played the game for the conditions and won, great in the breakdown, and great kicking game. Old Blues look forward to more of the same in their marshes in February. Hopefully we will have learned enough to turn the tide.

Congratulations to Jack Hall and Seb Huff on making their 1st Team Debuts!