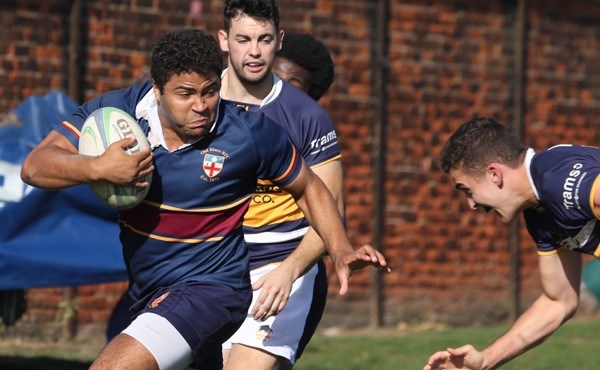 Old Blues put in a clinical display on a warm afternoon in Earlsfield managing a second successive bonus point. Starting the game down the hill, the blues came out firing and within 2 minutes were on the scoresheet. After a hanging kick off, Adam Wilkinson put pressure on their catcher only for it to be  in contact. After some phase  a James Peacock pick and go from the base of a ruck got himself over the line despite a 3 man free overlap to the right. Euan Copeland added the extras, his first game as the  and certainly not his last.

The first half tempo continued with our superior scrum making  of brute force and gravity resulted in numerous penalties. This resulted in a further 3 off the tee and a few minutes later, after a break down the right by Mark Davey and David Adeniji, Alex Satterfield was able to round the opposite wing to touch down for his first try (extras added). Bec then managed a spell of their own however the defence was more than a match and despite scoring a 3 pointer just before , Will Avery was able to find Euan Copeland who scored his first try for the club. Another 3 point penalty taken and the  score was 27-3

e second half started well for the blues and despite going uphill only conceded 3 points with our 22 rarely threatened. Having had repeated mauls brought down illegally, Copeland was able to add 2 more penalties when with 5 minutes to go Alex Satterfield powered over himself just managing to touch down for his second try of the game and thus clinch the bonus point.

du match was Euan Copeland for his 25 points. However, the pack put in an impressive display winning plenty of line out ball and owning the scrum. Josh Heath, Dan Harding and Pete Rosier putting in great shifts in the loose.

Also, massive congratulations to Ben Taylor on reaching 100 caps for the blues. 2 from 2. #ALLEZ